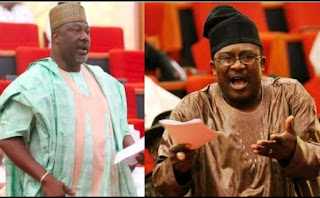 We could recall that Dino Melaye's election victory, in to the Nigerian Federal Senate house of representatives, as Kogi West senatorial district winner,  was nullified by Independent Electoral Comission, based on inconclusive results due to violence and killings during the last election which held on November 16.

Report, of the election rerun which held on Nov. 30 according to the electoral commission, declared his opponent, flag bearer of All Progressive Congress, Smart Adeyemi  as the winner.

It appears Dino will have to vacate his senatorial position, if he concedes to the result of the election.

Do you think, he would bow out gracefully?

at November 30, 2019
Email ThisBlogThis!Share to TwitterShare to FacebookShare to Pinterest
Labels: News