Sia stole John Legend's Grammy awards, while his wife let her get away with it. 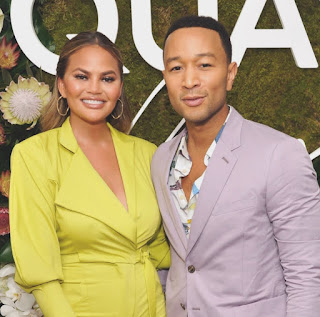 Lately John Legend won the people's 2019 sexiest man alive, and since then, the 10th time grammy award winner has been trending across social media.

Sensational singer Sia, visited John Legend and his wife chrissy teigen, and she decided to steal some of John's grammy awards, oh wait she was only joking, of course Sia may not be a grammy recipient yet, but she has been nominated, couple of times, precisely nine times, and hopefully in future she'll finally win a grammy.

According to the Chandelier singer, she jokingly dropped a post on instagram saying “Oh dear @johnlegend and @chrissyteigen I super dooper love you, your children, your politics and…um… Your grammys…byeeeeee,”

And chrissy gave a cute response to Sia's post, she responded “Take them all! You deserve 10 more!!” 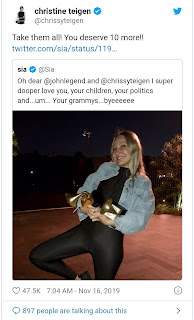 Here you have it people, Sia was just playing and obviously taking pictures with John's grammy awards, isn't she just cute?

at November 17, 2019
Email ThisBlogThis!Share to TwitterShare to FacebookShare to Pinterest
Labels: Entertainment