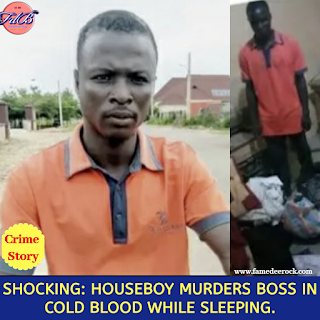 We live in a very harsh and horrible time, where the lives of humans no longer count. Incidence of murder and robbery had been the order of the day all over Nigeria. Another sad incidence of houseboy who murdered his boss in cold blood, obviously because he covets his boss' properties had been reported at the federal capital territory, Abuja.A 27 years old man, identified as Cephas Iliya, had reportedly killed his boss known as Martin Omeri overnight, on the 17th of November 2020, he had hit him with a log of wood, while the he was asleep, and after killing him, he made away with some of his properties, probably the main notion behind the heinous crime.

The corpse of the victim was discovered two days later, 19th of November, when those living in the neighbourhood could no longer endure the stench emanating from  the deceased residence. Hence the police was alerted.

The Nassarawa police command later apprehended the houseboy who fled the house after killing his boss. And he confessed to have snuck in to his boss' room while he was asleep overnight, hereby hitting him hard with a log of wood. Also some of the deceased valuables were found at the residence of the suspect at the scene of the arrest on the 24th November 2020.

Perhaps if the deceased had bolted his door before sleeping, it could have prevented the houseboy from killing him. No one can be trusted, especially houseboy and housemaid, it's now becoming a rampant occurence.

Is it still advisable to give housemaid access to one's room.