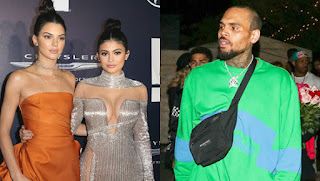 It is so awesome to know someone has your back in your trying times. Kendal and Kylie Jenner topped the chart of true friendship.
It's no secret Chris Brown was detained by Paris police for nearly 24 hours on Jan. 21-22 after shocking allegations of rape were made against him.

He was freed with zero charges. His lawyer confirmed that he plans to sue the accuser for defamation. A close source to the Jenner sisters reveals they aren’t looking to talk about the accusations put on Chris but they have full support for him and feel bad that he is going through all of this because they believe him.
Anyways that's what true friendship is all about. Congrats to chris, but he has to be more careful in future, it seems the freaky friday crooner is always having occassional scandal.
at January 24, 2019
Email ThisBlogThis!Share to TwitterShare to FacebookShare to Pinterest
Labels: Entertainment