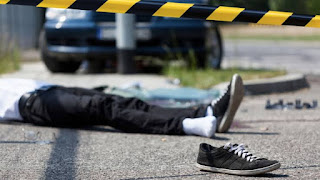 What a wicked world we live in, an official of Kano Road Traffic Agency, was reportedly killed in a deliberate hit and run yesterday, by a reckless driver, who is yet to be captured by the police, after escaping the scene of the crime.

On tuesday 29th October 2019, Tijani Adamu, 27 years old, left home for work as usual, unknown to him, he won't return home at the end of the day. Late Tijani, was controlling the traffic flow on Airport road , in kano, according to an eye witness, when a yet to be identified reckless driver, beat the traffic light.

When Tijani, observed that a reckless driver had broken the traffic law, he stopped the driver and entered the car of the traffic offender forceful, hereby ordering him to drive to their head office on club road.
The driver bluntly refused.

Therefore, angry Tijani, got down from the car and started trying to remove the plate number of the offender's car, on noticing this, the driver wanted to escape, and deliberately started the car hereby injuring Tijani mortally.

The colleagues of the victim at Kano Road Traffic Agency, tried to rush him to the hospital, but he died in transit and was confirmed dead on arrival at the hospital.

The victim was buried in islamic burial rites, while the traffic agency had reported the incident to the police at Kano State Police Command, and an investigation had been launched, so as to find and arrest the hit and run driver.
at October 29, 2019
Email ThisBlogThis!Share to TwitterShare to FacebookShare to Pinterest
Labels: Crime Story, News