Shocking!!! Married men can now officiate as priests in catholic church....see the criteria given by the pope. 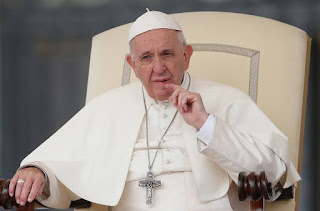 According to reports, a proposal called viri probati, had been approved by the pope for the reverend fathers operating in south american countries, like Brazil, Columbia, Peru,Venezuela, Eucador,Suriname and French guiana. This proposal stipulates that older men who have been married for a long time, and has a stable family, with no scandal, and well respected in their respectives communities, can now be ordained as catholic priests in the afore mentioned countries, there's also a clause, the married men must have been already ordained and serving as deacons in their various churches.

So many rules, but a lot of married men would still meet up with the criteria.
Will this change of rules, affect the holy church, in other countries outside the approved south american region

What do you think?
at October 29, 2019
Email ThisBlogThis!Share to TwitterShare to FacebookShare to Pinterest
Labels: Lifestyle, News