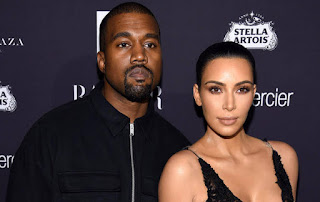 The star of Keeping Up With The Kardashians, reality TV show. kim Kardashian may be having issues in her marriage, due to her husband's-Kanye West newly found born again lifestyle.
According to Kim, her husband has made some stringent rules at home, especially regarding the children's lifestyle, ever since he found christ again, and started his Sunday's Service show.

The mother of four,revealed on one of their KUWTK's show episode, along side her sisters, Kourtney and Khloe, that she's having issues with her husband's newly found religion and lifestyle changes.

She states “I do think that, you know, he is my husband. So, I obviously want to honor him and what he’s feeling. And he’s been going through this life change, and it’s mostly about the kids. ‘We got rid of TVs in the kids’ rooms and removed makeup from North’s room – and he’s been very… had this, you know, epiphany of being this – not that he wasn’t an amazing dad – but being a little bit more strict as a dad and being very forceful on the imagery that’s in our household and what they see.”

We could remember vividly few months back, when Kim revealed, that her husband complained about a particular outfit she was going to wear to a show, and she felt like he's trying to tear down her confidence, after building her up, these past years.

Kim had revealed she is drawing a line, pertaining her husband's religious beliefs, effects on her, although she supports his decisions as regards the children not having a television set in their rooms, and other rules strict parents give, but she's not changing who she is due to her husband's new religious beliefs.

According to kim, she said But I’m always gonna be me, and so, we had that discussion and that fight. ‘I think, at the end of the day that’s what marriage is. He’s gonna do things that I don’t agree with, and I support him, and vice versa.

So, with this, it was like we were like just having this conversation of what is too much and I am a mother of four, like, I am gonna be forty next year.”

Do you think Kim and Kayne would reach a common ground, pertaining the recent changes in lifestyle, which would affect their family, whether they acknowledge it or not?

Leave a comment below.
at November 07, 2019
Email ThisBlogThis!Share to TwitterShare to FacebookShare to Pinterest
Labels: Entertainment, Lifestyle