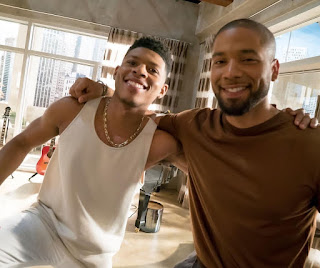 Things appear to be finally turning around in favor, of the embattled actor Jussie "Jamal" Smollet, who was black listed by hollywood and removed from the popular Fox music/crime TV show "Empire" after he was prosecuted for supposedly staging a hate crime.

Ever since Smollett lost his contract renewal on the show "Empire" he had not gotten another project since then, which potentially insinuates he may have been black listed by hollywood, obviously because of his soiled reputation and character, producers and directors may be avoiding any association with him, due to the bad publicity he brought to his last show "Empire".

But through it all, Smollet stood his ground, that he didn't stage the attack, that he was indeed a victim. Even after the  charges against him were dropped, some still thought it was fishy for the charges to be dropped abruptly.

In November, Jussie sued the City of Chicago, and the brothers he is accused of paying to attack him, and the Chicago Police Department Chief claiming they all lied about him allegedly staging the incident. He said he's friends with the Osundairo brothers, but he had no idea if they were truly involved in the attack he experienced on Jan 29, 2019.

Smollet's lawyer states that the Osundairo brothers were interrogated and detained for 47 hours, and they gave in to the pressure of Chicago's police department, because they were afraid they may also be charged. Thus giving false confession under duress.
Perhaps, all these  factors indicating Smollet lis truly innocent, has prompted the producer of the show "Empire" to bring back Jamal for the final season of empire.

'It’s fair to say it’s being discussed, but there’s no plan as of yet to bring him back. There’s been no decision made.'

This means, there's still hope for Jussie Smollet, his acting career, may not be over after all. Do you want Jamal character back on empire?

at December 19, 2019
Email ThisBlogThis!Share to TwitterShare to FacebookShare to Pinterest