Cunning Girl traps thief with sex till he was arrested. 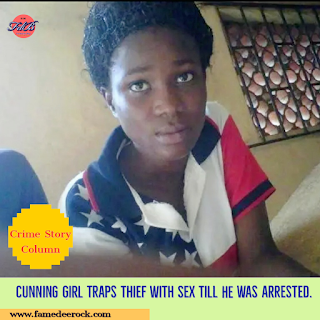 A Nigerian man identified as Tosin Lamidi , 21 has been arraigned before a Lagos court in Ejigbo,Lagos for conspiracy and theft after he allegedly broke in to a lady's house and made away with her phone and laptop.
The victim known as Gift Nseobong decided
to call her line, and fortunately for her, the thief didn't switch of the stolen phone, for a reason best known to him. So Gift pleaded with the thief, Tosin to return her phone, but he refused.

Finally Gift asked the Tosin to release her sim card, if he can't give back the stolen phone, because she has so many important contacts she doesn't want to lose. Then the thief proposed he'll have sex with her before he gives the sim card back to her. So she agrees with a sinister plan to trap the thief and get him arrested.

An hotel arrangement was made by the thief, so that they'll meet and sort out their plans. Unknown to the thief that the lady had informed the police at Ikotun division about the plan she had with the thief.
So when Gift got to the hotel located at Ikotun round about, she hooked up with the thief, but before the earlier agreed sexual intercourse could take place, the police barged in and arrested Tosin, the alledged thief.

Gift was able to recover not only her sim card, but also her phone, while the Tosin's trial has been adjourned to 22nd of July. He is to remain in police custody until he pays a bail charge in sum of N50,000 with a surety, pending the time his trial will start.

Do you think the victim, Gift acted bravely or foolishly? She could have been hurt by the thief before the police arrives, what do you think?

Leave a comment below.
at June 17, 2020
Email ThisBlogThis!Share to TwitterShare to FacebookShare to Pinterest
Labels: Crime Story, News